The Structure of Policy Change
Derek A. Epp
University of Chicago Press, 2018

When the Soviet Union launched Sputnik, the Red Scare seized the American public. While President Eisenhower cautioned restraint, his hand was forced, and by the time President Kennedy proposed landing a man on the moon, NASA’s budget had increased five thousand percent over its pre-Sputnik levels. Spending on the space race is in no way unique: almost every policy area has its own Sputnik-type story, where waves of popular support for an idea (or disillusionment with a previous one) created new political priorities, resulting in dramatic changes to the budget or compelling agencies to respond quickly with little knowledge or preparation. Is this instability an inherent feature of the policy process, or is it possible for an agency to deal with problems in a way that insulates it from swings in public opinion and thus imposes some stability on the decision making process?

Derek A. Epp argues that some agencies can indeed do that and that instability is at least partially a function of poor institutional design. While it is inherently more challenging to maintain stability around complex problems like immigration or climate change, the deliberative process itself can affect the degree of stability around an issue. Epp looks at whether agencies follow a deliberative model for decision making, in which policies are developed by means of debate among a small group of policy makers, or a collective model, in which the opinions of many people are aggregated, as with the stock market. He argues that, in many instances, the collective model produces more informed and stable policy outcomes that can be adapted more readily to new information and changing public priorities.

Review in Perspectives on Politics by Christopher Faricy

– Co-winner of the C. Herman Pritchett Book Award from the APSA Organized Section on Law and Courts, 2019 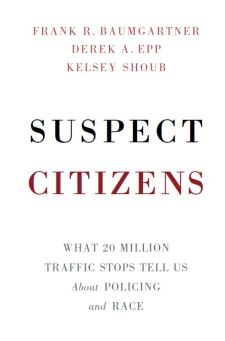 Suspect Citizens offers the most comprehensive look to date at the most common form of police-citizen interactions, the routine traffic stop. Throughout the war on crime, police agencies have used traffic stops to search drivers suspected of carrying contraband. From the beginning, police agencies made it clear that very large numbers of police stops would have to occur before an officer might interdict a significant drug shipment. Unstated in that calculation was that many Americans would be subjected to police investigations so that a small number of high-level offenders might be found. The key element in this strategy, which kept it hidden from widespread public scrutiny, was that middle-class white Americans were largely exempt from its consequences. Tracking these police practices down to the officer level, Suspect Citizens documents the extreme rarity of drug busts and reveals sustained and troubling disparities in how racial groups are treated.